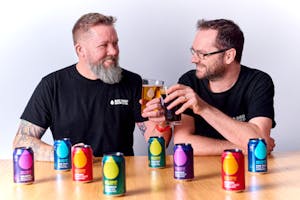 Craft Collective: What got you into brewing non-alcoholic beers?

Rob Fink: I simply hit that point that a lot of craft beer fans get to, I think, which is: I want a great beer but I don’t want the alcohol. And that’s just because we’ve all grown up a bit. I’ve got 3 kids and a wonderful wife, a busy job, and I try to exercise a bit. Guess what? Alcohol doesn’t always fit into that, but sometimes I want a great beer. And Big Drop scratches that itch.

CC: So what was the process in developing your brewing style (trade secrets aside)? How long did it take to perfect the process?

RF: I’m always a bit taken aback when I hear about how the big strategic breweries have taken as long as they have to release their new non-alcoholic beers (and usually a few years after us!) and periods of multiple years are thrown around as badges of honor. For our part, our brewer, Johnny, perfected our first beer, Galactic Dark, in about a dozen trial brews as I recall. And the recipe hasn’t changed since. He’s had to work harder on other styles but he’s got the process down to a fine art now.

In short though, we use less grain to start with so there are less sugars available to convert to alcohol. It’s a bit more complicated as that, but the other stuff is the “secret sauce”!

CC: How do you determine what styles to brew?

RF: It certainly started as a desire to make the beer I wanted to drink. Only a fool would release an alcohol-free stout as their first ever beer! However, as we’ve grown and gained more customers, we just listen more and more to them and what they want to try.

CC: How do you ensure Big Drop reaches global markets at optimum freshness?

RF: We brew in market! We took the decision early on simply to partner with great breweries around the world. As such we can (and do) now brew in the UK, Melbourne, London (Ontario), and Chicago. That means our beer is as fresh in Chicago as it is in Melbourne and we significantly reduce our carbon footprint in the process. The fact we don’t own the breweries we use to make our beer is something which I am spectacularly unconcerned about: I’d rather sell fresh beer and help reduce carbon emissions.

CC: Who is the Big Drop consumer – primarily those looking for low alcohol products, or beer aficionados seeking an alternative?

RF: We sit in the craft beer scene – we’re unashamedly craft and about 80% of our consumers drink alcohol on a regular basis. So, really we seem to scratch an itch that drinkers of craft beer have – that sometimes you just want a great beer, but you don’t want the alcohol. The underlying reasons for that could be general health & wellbeing or any number of specific things like training for a sporting event, corporate policy for working hours, young kids & early starts, etc. But we don’t really worry about that – we’re just making great beer that happens to be non-alcoholic.

CC: Why did you want to expand Big Drop’s footprint to Massachusetts, Rhode Island, and Maine?

RF: The timing could not be better, both for us and for any New Englanders who appreciate their beer. With interest in the whole NA category on the rise and a big summer on the cards, there’s a place at the table for beers that don’t compromise on taste, even if they only come in at 0.5% ABV. And who better than Craft Collective to understand the market, seize the opportunity and make it happen. 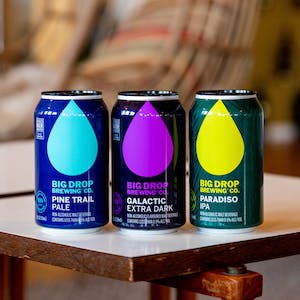 Find Big Drop near you.

See where we’ve made recent deliveries near you with our Delivery Tracker.